Marmalade with Three Kinds of Citrus 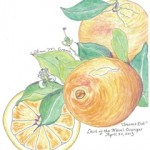 Marmalade with Three Kinds of Citrus
Ann M. Evans
This is a marmalade lover’s marmalade with thick peel and a bitter taste. English marmalade is made with Seville oranges. We don’t grow them in CA; they have an almost bitter flavor. I’ve found grapefruits add almost the same flavor, and make it a true California marmalade. I first made it for my English husband David, who was homesick for English marmalade, and because there was a bad frost that year and the oranges on our tree needed using fast. For flavor, soak the citrus overnight, as indicated.

Wash fruit well. Quarter. Soak cut fruit in the measured water overnight in a non-reactive container. Remove fruit and cut into very thin slices, about one-eighth inch thick. Return slices to water, place all contents in a non reactive pan and boil for one hour with the lid off.

Add sugar, stir until it is dissolved, and continue to boil for about 20-40 minutes until mixture reaches 220 degrees on a candy thermometer. After 20 minutes you may notice the color change to deep amber. The boil changes as the mixture rises in temperature – a rapid boil with very small bubbles.

Test the marmalade to make sure it will set by putting a teaspoonful in a glass custard cup and placing that in the freezer for about five minutes. If it gels, or almost gels, it is ready, if not, boil a few more minutes. Do not over boil, as the marmalade with become too thick. This is the tricky point – not too thin, and not too thick.

Using a funnel, ladle the mixture into hot, sterilized pint jars, leaving about one inch on top to create a vacuum seal once the mixture cools. Wipe the rim of the jar clean, and put on top of it a lid with a rubber seal that you have heated in boiling water on the stove for several minutes. Place the ring on top of the lid and tighten. Let sit until you hear the lid “pop” at which time you will know that a seal has been created. Alternatively, press down on the seal with your finger when the jar is cooled, several hours, and make sure the lid doesn’t pop back up.

Refrigerate contents after opening. Will keep up to one year unopened in a dark, cool pantry. (Makes about 4 pint jars.)